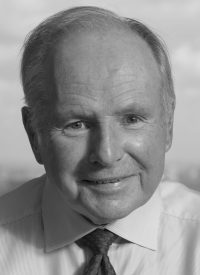 Don A. Sanders founded Sanders Morris Harris LLC in 1987. More than 30 years later, the successor to Sanders Morris Mundy is one of the most successful wealth management firms in the United States. Prior to starting Sanders Morris Harris, he was employed for nearly 30 years by E.F. Hutton & Co., one of the nation’s leading securities firms, serving as Executive Vice President as well as being a Board Member. Mr. Sanders is well-known for his financial and sports expertise, and he is equally well-respected as an active community leader. In 1979, he became a minority owner of the Houston Astros. Twenty years later, Nolan Ryan, Reid Ryan and Mr. Sanders founded Ryan Sanders Baseball, which today owns the Round Rock Express (Triple A affiliate of the MLB Texas Rangers) and Ryan Sanders Sports Services (RS3). He is Founder of the Houston Police Foundation and currently a Board Member of the Houston Police Pension System. He is a founding Board Member of the AdvoCare V100 Texas Bowl and the Nolan Ryan Foundation. Previously, he served on the Board of Regents of the University of Houston. Mr. Sanders has a long tradition of supporting area schools and has built a baseball field for the KIPP Explore Baseball program, as well as the baseball field and facilities for the Kinkaid School. He endowed a world-class baseball facility at his alma mater, Sam Houston State University where he was also inducted into the Hall of Honor. In addition, he funded a life-sized bronze statue at the Baseball Hall of Fame in Cooperstown that commemorates the All-American Girls Baseball League. His tremendous love for animals led to Friends for Life, a no-kill animal rescue and adoption shelter where he financed a state-of-the-art facility. A native of Mexia, Texas, Mr. Sanders received his BBA from Sam Houston State University in Huntsville and his MBA from the University of Texas in Austin.