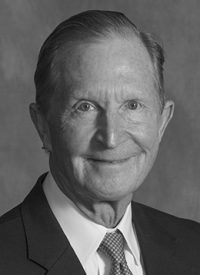 George L. Ball serves as Chairman of Sanders Morris Harris, and Director and Co-Chairman of Tectonic Holdings, its parent company. Mr. Ball has been a Director of Sanders Morris Harris since 1992, and has held a number of executive positions since then with Sanders Morris Harris and its affiliates. He helped build Sanders Morris Harris (and then The Edelman Financial Group) into a company worth nearly $1 billion. He began his career as a stockbroker at E.F. Hutton & Co., one of the nation’s leading securities firms. He rose to become Regional Vice President, Director of Research and then National Sales Manager before being named President at age 39. Mr. Ball left E.F. Hutton to become Chief Executive Officer of Bache & Co. (later Prudential Securities), which had been purchased by Prudential Insurance Company of America where he served as a member of the Executive Office. Mr. Ball has been a director of numerous public/private companies and charitable organizations. He has appeared frequently on financial news programs and is a former Governor of the American Stock Exchange and the Chicago Board Options Exchange, and served on the Executive Committee of the Securities Industries Association. Mr. Ball holds a degree in economics from Brown University and served in the U.S. Navy.